Honoring the Horse’s Learning Process: reflections on a clinic with Martin Black 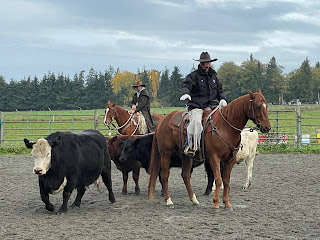 We were privileged to host Martin Black for a great clinic last week, in which he stressed his approach to “evidence-based horsemanship” —recognizing the results of our communication in the horse’s immediate response. The participants came with a good foundation in connecting to their horses’ feet, so Martin was able to further refine our understanding and inspire us with his unique insights. He got us out of our comfort zones, challenging what we thought we knew, while giving us tools to communicate more effectively.

Whole post »
Posted by Wise Horseman at Freedom Farm at 4:16 PM No comments:

Readable Neutral: the art of slowing ourselves down and allowing our horse to communicate

In our horsemanship ground class last week, we were debriefing after an exercise emphasizing real connection with our horses—literally getting in sync with their energy, rather than insisting they get in sync with ours. We had been working with this idea in earlier classes, and this week, we all seemed to get to the next level. Each student had their own insights, and as we reflected on our progress one commented, “Gosh, you can do everything ‘right’ and still not connect!”
Whole post »
Posted by Wise Horseman at Freedom Farm at 3:58 PM No comments:

Keeping Cool While You Ride (Connecting to the Feet Series) 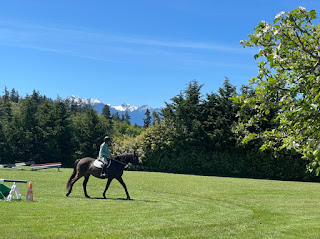 No, this article has nothing to do with that incredible hot weather we had last week. But wasn’t that something? At Freedom Farm, we survived by starting our day much earlier and getting our riding done before the heat of the day—something that folks in southern climates know a lot about! -MG
Today I’d like to talk about keeping our cool while riding—maintaining that conscious patience so crucial to building and maintaining relationship. Losing that balanced attitude can jeopardize our connection with the horse, and if we don’t find and restore it, there goes our whole training program. I know this sounds extreme, but there can be a domino effect that takes us right back to square one. It starts with me. If I can just stay cool—keep emotions in check, stay patient and quiet—when my horse gets distracted, it will save time and frustration in the long run.
Whole post »
Posted by Wise Horseman at Freedom Farm at 12:19 PM No comments:

Riding in Sync with the Feet, Part 2 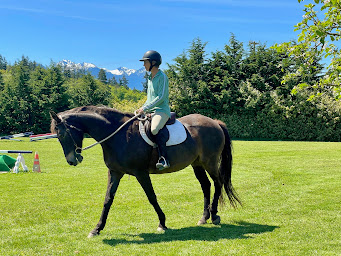 I have been having so much fun continuing to develop the ‘riding in sync’ exercises I introduced in my last video. It’s basically a flexible warm up program that gets you and your horse moving and feeling together. How we warm up and the attitude we express in our hands travels down to the horse—who feels everything. Sure, he feels our body move, and our hands move through the reins, but even more importantly, he can feel our intentions and attitude. So it’s as much about managing ourselves as anything. Horses pick up on everything!
Whole post »
Posted by Wise Horseman at Freedom Farm at 4:56 PM No comments:

Riding in Sync With the Feet 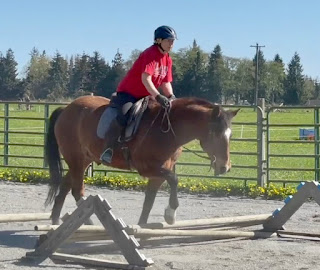 I call my latest video “Riding in Sync With the Feet”, the latest in a series on synchronization as it relates to connecting with the feet and communicating with our horse. It features a deceptively simple looking exercise over poles, at the walk (more on that later).

Horses naturally synchronize. It’s a part of being in a herd, and of being a prey animal. Life for a horse in a herd hangs on being connected to the group, with multiple eyes and ears tuned to environmental threats, moving together.

So the better we learn to synchronize, the better we move with our horse partners—largely by staying out of his way and allowing him to freely express himself. We may think horses only get to do that after the ride—tack off, running to be with their friends, etc. But we can cultivate that freedom of expression even as we ride.

Whole post »
Posted by Wise Horseman at Freedom Farm at 8:04 AM No comments:

I admired Meho from the moment I saw him, a handsome weanling owned by the mother of one of my students. They raised racehorses, and Meho was a good one, earning well over $50,000 at the track before being sidelined with a bowed tendon. I couldn't believe my good luck when he came up for sale and I was able to buy him for Freedom Farm. I began training him as a hunter/jumper, and one of my boldest young students, Chelsea Crabb, rode him at a number of shows. Meho did well, and, I realized he could benefit from more focused time with me.

At the time, I was deep into the Parelli training, spending weeks at a time at the Parelli center in Florida. My Parelli horse, William, began having lameness issues and needed time off. Enter Meho, the speedy OTB with a big personality. He made the trip with me to Florida and boy, did we ever learn a lot--quite a bit through mutual struggle, which I have shared in many a ground work class since. How we came around to our lasting partnership is a tale of its own, but suffice it to say, I had to let go of what I thought I knew and allow him to show me who he was and begin to really understand him. I've never forgotten that time with him.  He in turn learned to be present, accept contact, and slow the heck down (early round pen sessions with him at the "canter" wore quite a groove in the sand, shall we say...).

Whole post »
Posted by Wise Horseman at Freedom Farm at 2:17 PM No comments:

Imagine standing on the ground, watching a horse in the process of spooking. What can we observe?

Spooking is something all horse people have witnessed, but I’ve made a point here to break it down to predictable components—sort of a slow motion camera to show the process. We can expect this pattern in a spooking situation, and that kind of predictability gives us options, if we can train ourselves to 'observe, observe, observe'. Now extend that expectation to all horse behavior. What if every movement is the horse testing to see if it is safe to linger or better to leave...?

Whole post »
Posted by Wise Horseman at Freedom Farm at 3:03 PM No comments: