Horses and humans are pattern learners and that's a good thing. The first thing you need to know when comparing horse to human learning, however, is that the horse learns quicker. Way quicker.

We humans tend to see tasks as wholes—bridling, saddling, mounting—and get frustrated when, for all our best intentions and care, things don’t go well. The horse, meanwhile, has catalogued a lifetime of minutiae regarding his experience as a prey animal. So to him, that thing that happened that time, probably before you two had even met, affects the seemingly simple, matter-of-fact activity you are attempting.

Let's say bridling your horse tends to be a less than satisfactory experience—he has learned to evade the bridle, and is a bit shy around the ears. How will we go about setting a new pattern? We will start by deconstructing our habitual putting on of the bridle, identifying steps which will address different aspects of the whole process. Then we will install new steps, one by one, setting a new, happier pattern for both of you.

Because the horse has learned to resist the bridle, let’s start from scratch (no bridle).  The best opportunity is when we catch the horse with halter or lead rope.

Stand next to your horse, halter at the ready. Begin by putting your finger tips on the off side of the neck (away from you), and ask the horse to turn his head toward you before slipping the halter on. Get in the habit of doing this every time you halter the horse.

Holding the halter clip (or knot) with your left hand, below the horse's chin, place your other hand lightly on his poll. With gentle pressure downwards, ask him to lower his head. Important: the moment he relaxes downward, release the pressure.

At this point, we have two steps or components to our program—still no bridle has appeared to trigger an old unwanted pattern.

Suppose the horse is a little ear shy— with his head low, lightly run your forearm (not your hand) over his forehead and over his ears, even up the crest of the neck, then observe and see how he responds to that. If he handles it well, then let your hand try that motion and see how it goes. If not, return to using your forearm, getting him used to having something slip over his ears.

Go ahead and give the horse a cookie while his head is down, and, hanging the lead rope over his neck (so he won’t think he’s loose), remove the halter. Repeat by lowering his head (with a cookie if needed) and putting the halter back on.

Note: This is fun to do, but the point is not the cookie—just the release of pressure will reward your horse with comfort. For our purposes in this exercise, the treat gets the horse working his mouth.

When you and the horse are comfortable with the previous steps, try suggesting the touch of a bridle, using your lead rope. With the halter on, make a loop with your lead rope, large enough to go around the head, and hold the loop in front of the forelock and under the chin, as if you were preparing to present the bit to your horse. Your upper wrist should be between his ears, lower hand under his chin. Ask your horse to lower his head again. This is the same as lowering his head in the earlier exercise, but with a subtle step further.

The lower part of the lead rope under his chin can serve as a pretend bit. Again, with halter on, his head down, and the loop in place, have a cookie in the lower loop hand, and slide the lead rope into his mouth with the cookie. With your upper hand (between his ears by his forelock), lift the rope in his mouth right to where the bit would be. (The halter is still on, so if you need to, use your lower hand to lower his head again. And be sure to lower his head to take the rope out of his mouth.)

Wow! We have played with all the components of bridling, and we haven’t even gone to the tack room yet.

You can see how, with just a halter and lead rope, you can prepare your horse for the bit and bridle. So, whether you are starting a young horse or retraining an unwanted behavior, you can work these exercises in anywhere, in small easy steps. When it’s time to introduce the bridle, the horse will be confident in what he knows.

And by slowing yourself down and being mindful of all the components that make up a learned pattern, you’ve made progress, too!

Next steps: To take this set of exercises further, get good at doing them from both sides of the horse!

Photo series with Mocha, a mare: 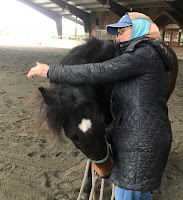 Run your forearm from forehead to crest
Not pictured: Mocha did get a cookie! (to involve her mouth)


Posted by Wise Horseman at Freedom Farm at 8:17 PM