Joey's Hind Leg and What We Learned About Wound Care

by Mary Gallagher (with comments from Kip Tulin, M.D.

This is a story I've been meaning to share since it happened. Meanwhile, I've continued to use the basic approach here with success. At the time it was a bit of a science experiment, which thankfully produced positive results. I'd be interested in comments from those of you who have had success with natural remedies for wound care as well. I also invited Dr. Kip Tulin, a Freedom Farm regular and retired physician, to comment below on the basics of this art. -MG

Joey injured his left hind leg very badly in May 2012. He had kicked through and then gotten tangled in his pen's electric fence. The wound was wide open and there was no way to stitch it. We first irrigated the wound very thoroughly with cold water. It was a large, deep wound so I must have kept the hose on it for 30 minutes. We then left it un-bandaged and applied herbal products, with the result that the granulating tissue nearly covered the area, with the exception of a small area in the center that drained constantly. Then one day it just got really swollen and split down the middle. It was horrendous. Out of ideas and very worried about Joey, we took him to the veterinary hospital.


There, Joey received intravenous antibiotics inserted into his upper leg, and the area was debrided. This treatment took a week and the bill was astronomical. Joey arrived home with a big bandage and instructions for cleansing the wound and re-applying bandages at regular intervals.

Joey had other ideas: he clearly showed us that he did not want a bandage on his hock. He repeatedly scraped it off on the fence, or with his other foot, so we hobbled him, which only slowed him down. We were still bandaging him twice a day! And each time I removed the bandage there was a scum to be washed off. So keeping the wound clean enough to keep out infection was daunting, to say the least.

Then one day I removed the bandage and this is what awaited me. Once again, in spite of the vet's and our best efforts, the granulating tissue was split down the middle and across the wound, but this time it was worse; the area was split and infected with staph. Also notice the whitish-pink look of the flesh; it had kept this sickly color throughout the bandaging cycle.

My heart sank. How was Joey going to survive this one? We couldn't afford to send him back to the hospital.

Unwilling to call it quits, I decided to get smarter and this was my new mission. I recalled that Manuka honey was antibacterial and effective against staph, as was exposure to air. I also called my friend Claudia Garner at Equine Soundness and texted her the picture. After hearing Joey's story—especially the part about his intolerance of bandages—Claudia suggested we try a bentonite clay poultice rather than bandaging.

Joey was already on SMZ tablets (Sulfamethoxazole and trimethoprim, an antibiotic used to treat a wide range of infections in horses and other animals) so we kept him on those as an oral antibiotic (but see Kip Tulin, M.D.’s note below).

At this point it seemed we'd gotten to a similar place with conventional treatment and bandaging, as well as herbal treatment without bandaging, both times arriving at the same deep, draining crevice. So I combined my ideas with Claudia’s, and decided to try a poultice layering Manuka honey, gauze, and bentonite clay.

Here’s how I applied the poultice (also see video below, with demo of application):
Every two days (which was how long it took each poultice to dislodge from the leg), I
Here is what it looked like the day after the first poultice. I had just cleaned off the clay with the terry towel. Notice the bright pink flesh, which gave me hope that I was on the right track. 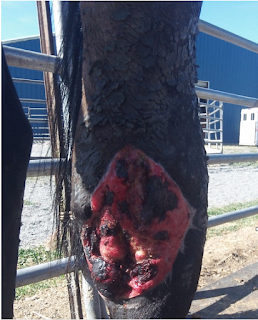 In 3 weeks the giant crevices were closed and all drainage had stopped, something we had not achieved in our previous two attempts.

The poulticing process was so simple! It only took me a few minutes to replace the gauze and clay. I never washed it unless we were going to take a photo. Every other day, I'd take the last of the old, dislodged poultice off, and rub the wound with a terry cloth towel to clean up and debride. After the second week, proud flesh was no longer an issue, so I also stopped his oral antibiotics at that time.


And so the wound stayed clear and proceeded to heal. Speaking of time to heal, I learned a lot of things along the way but this is kinda cool: a doctor friend informed me that the optimum healing time for a body is around 6 weeks post-injury; after that the body slows down the process. So in the next photo the wound was 4 months old and slowly closing at about a millimeter a day.


Looking at the new hair growth around the site, I remembered that even before the second inflammation/infection event, we had been told that Joey would need a skin graft to ever have hair back on this part of his leg. Apparently not!

One year after his grievous injury, Joey was in robust health and back to work, such as this trail ride in which he helped me pony a new arrival to the Farm!
And the scar? I took the following photo as I wrote this post, 3 years on. Joey's just another good looking guy with an interesting scar.
In conclusion, I must say that although it took me a while to get around to it, I have really been wanting to tell Joey's story. We are always learning here at Freedom Farm, and if there is anything in what we went through with Joey that will help other people with the care of their horses, I want to share it. It is because of Joey that we now treat all major wounds with Manuka honey first thing (after proper irrigation, of course, and lately, adding a few drops of Calendula tincture to the honey). Joey really helped us learn something extraordinary about mother nature's pharmacy.

Be sure to check out a more recent case we posted, about a nasty facial wound on another Freedom Farm horse, Bob. Remembering Joey's example, we used Manuka honey (without clay) on Bob’s face from the get go, with great results. His frequent rider and good buddy, an M.D. named Kip Tulin,  wrote Bob's post and contributed the handy note on wound care below.

Wound healing is an amazing process and there is definite crossover between horses and humans. I appreciate Mary Gallagher's approach here very much. Her initial care and regular follow up, with attention to detail, really make the difference. I summarize the basics of wound care below. If you are interested in the details of the process of wound healing and management, I would suggest this article.

Some basic principles that apply to care for any wound:
And so on while the wound heals, as in Joey's case.

Posted by Wise Horseman at Freedom Farm at 10:59 AM