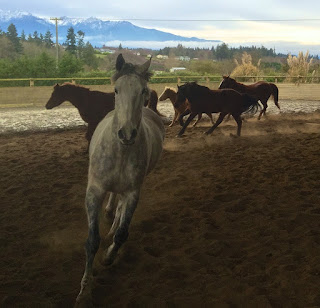 This article is part of our "Transformation of Niko" series, by Michelle Grimmer, jumping and dressage instructor, and Niko's owner.  Our previous post was the fifth in the series, and has links to Michelle's first installment. -ed.

Michelle asked me to spend some time with Niko as her school year got busier. Obviously, the dressage/jumping work itself was being well covered by Mary and Michelle, so I decided to focus on groundwork and relationship building with Niko. One of the very most important things I look for from a horse is the feeling that they WANT to be with you and that they look forward to a new learning experience with enthusiasm.  This is sometimes very difficult to achieve - after all it's hard for a human to compete with the safety and comfort of a horse's herd mates. I noticed that Niko tended to prefer being with his herd rather than with people, and he seemed to worry quite a bit about the herd when he was out.  He also tended to do things a bit grudgingly - not really engaging with his person, even if he (Niko) was otherwise performing beautifully. With Niko, there is an added component that he is one of the more dominant horses in his herd so he has a strong need to look after his buddies. Also, because of whatever stresses he had in his past life, he had some definite worries.  So he would need to feel pretty secure and comfortable to let all that go and engage with a person.

When I begin with a horse, I've learned to avoid old habits I know are issues as I work to build the new relationship.  With Niko, I'd observed that he often checked out mentally when put on a lunge line or turned loose by himself in an arena.  So I decided that during my work with him, I would leave those exercises out for a while, until he was ready to connect with me better.  Sometimes he did need to just burn off some energy, so on those days he just needed to run, I said great! Go play with your buddies in the big arena and then we can talk. Same thing with the big round pen - rather than just put him in it and let him show off his amazing gaits, I always had trot poles placed so that he had to think the whole time. If he lost his brain and just started running, a long line of trot poles would show up, forcing him to regroup his thoughts and his feet! Rather than reinforcing his old habits --which for Niko meant losing his brain, getting really excited, running around and showing off -- I tried hard to help him develop  new habits, i.e., thinking things through, asking what the person wants, and doing it calmly.


I started by just getting to know him a little better, playing Mary's grooming-on-the-spot game [link to new blog post soon! -ed.] and doing chores with him, such as having him follow me on a lead while I went about tasks such as getting other horses out, cleaning the arena, setting jumps, etc. I learned which of my horses he liked 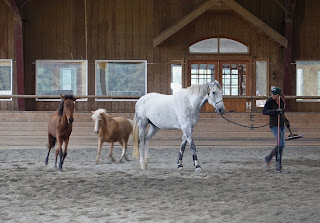 the best, and then let them hang out in the arena together while I worked with other horses right around them.  I had him stay with me while I taught lessons, occasionally having him help me demonstrate something, but mostly just spending time being with him.  Basically, I integrated him into my personal herd.
As far as more structured groundwork, one of my first tasks was getting Niko accustomed to tools I often use, like my training stick.  He would allow it to touch him and relax at a standstill, but then react strongly to it if he was in motion.  Or he'd be okay with it until I used it to reinforce a request, such as touching him or the ground with it, in which case he'd get very upset about it all over again.  He wanted to see the human world in a very black and white way - either the stick was a grooming tool or it was a whip.  Either it didn't mean anything or it meant 'fly off on a circle and run around'.  He didn't stop to consider that I might be trying to talk to him about moving certain parts of his body and that I didn't want or need a huge reaction.  He was failing to read my INTENT in the beginning and was making quick assumptions just because he saw a stick move. In short, he wasn't  really tuning his brain in.  Over time, as Niko learned to read my intent, he started to get more engaged in the work I was doing with him.  Exercises we covered briefly included driving rather than leading on both sides (I really like to focus on getting a horse comfortable being worked from either side), playing with obstacles to give yields purpose,  jumping on-line, teaching him to roll a ball, a little one-rein riding - things to help him develop his thinking skills in areas he hadn't had the opportunity to before.  We also did some trot pole work and some free jumping gymnastics in the big round pen to keep him in good physical shape.
In the weeks I was able to spend with Niko, I feel he and I were able to start developing a relationship. He was definitely beginning to look for what I wanted and ask questions of me, rather than get tight and hurried as soon as he didn't understand something.  He gained some problem-solving and coping skills he can use as he continues his education with Michelle.